I am speechless and then at the same time will produce pages for what has just happened.

Plain and simple: I reported sexual assault of Paul Rockower, Anshul Gupta and a security guard in Patna Bihar in 2014.

Swept under the rug.

I go to the city of Kolkata September 6th, 2017. I arrive in the morning. No one comes for three hours. Needless to say I am crying and shaking, I am a trafficking survivor so these types of situations put me in a state of fear. Living with depression, anxiety and ptsd has been one of the hardest things to do, aside from being black and being a woman.

This has continuously been used against me. Infact, during that 2014 incident everyone took my abuse as a joke accept for Emcee Purple.

So this trip, I thought I had a friend in Malabika Brahma/ Malabika Bhattacherjee of BrahmaKhyapa and Jungle Music School. I trust too easily…I’ll figure out how  continue being me so that my ease in trust meets the right being.  As soon as I arrived, I felt semi-welcomed, for this is important, not fully welcomed.

They introduced me to a few people. But as the days went by we did nothing. We just sat in the house all day while their daughter Torsha went to school. Everything was hectic then there was the second week on Sunday, the Nandan Cypher. From there on I began to be treated like I was nothing and unimportant.

Malabika got no filming of me done and took a call from a person named Emrek for her next project in Europe. She became very disrespectful. Told me to shut up because she needs to take the call. She stopped speaking English after the third week.

The day after I had my panic attack. She monitored my sleeping. She went through my emails on my computer. She went to lengths to tell people whom I worked with before that I was uninterested in working with them and she told me the same about them.

Everyday she demanded money from me as the accountant only game me 10,000 INR for travel. They used it for travel, for food, paid their friends for rehearsals that I was not a part of. Framed the entire program as their own by taking footage of us hanging out and saying it was a class in collaboration with “Jungle Music School” and “BrahmaKhyapa.”

They didn’t teach a single class. They denied me toiletries such as toilet paper, toothepaste, shampoo, pads, and food. If I didn’t eat with them I didn’t eat. During Durga Puja, Malabika told me that Sanjay abused her and treated her very badly and so I asked if she wanted me to stand with her in confronting him. She of course said yes. As soon as she returned we all began arguing and the Sanjay Bhattacherjee stated “You have done nothing!” to me. I was very angry but of course, Malabika Bhattacherjee took his side. Which I actually expect from a normal domestic violence situation. I had a panic attack and was ridiculed for it. She threatened to kick me out. The next day I saw her bring me roti to eat but she turned to the side, wiped off the bottom and folded it over. She put it on top of my food, I felt strange but I picked it up and bit it, and ants came out into my food. Everyone behaved as if everything was normal. 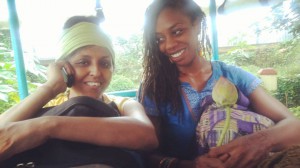 This felt different, controlled and planned. I know these situations by being a trafficking survivor. And as I think, she would explain “We only live once and after this there is no more so we have to get all we can.” I try not to judge people, but I didn’t know this belief supported her actions so heavily.

During my panic attack, she stood over me and yelled ” No one cares about you! Not your friend A.G., not Cizzy, no one! I am the only person you know in this city.”

I was so afraid. They began treating me like a slave. They had a maid that came in on Tuesdays and I remember I gave her jewelry and after the next time she came I didn’t see her again. When the maid wasn’t there they treated me with the same behavior. She would order me to get up and go get things for her like food and drinks or whatever she needed.

They told me to ask for travel money from Subir every week. And as soon as they got paid, they were so nasty to me. Ignoring me, completely stopped speaking english. Bought things for themselves and left me out. refused me food and threatened to kick me out every week after my panic attack. She told everyone I was “mad” and I was “Crazy.” She went through my emails. She came in while I was sleeping on the concrete floor in an un air conditioned room. She said ” I saw you wrote a lot of emails last night.” She watched me, went through my personal writings and computer, wouldn’t allow me to leave alone and when I asked for someone to come with me they refused. SO I was trapped in the house the entire day.

One day they both left the full day. Because of the funds I am sure that is the day they decided to put the money in the bank. We went to Shanti Niketan and all my modes of communication were taken from me.

More to come. Because in hind sight, Malabika said that her daughter contracted typhoid fever before I came and that the medicine took up all the money from their European tour so could I please write the AIIS and ask if they could atleast get their checks in advance, you know, since the program didn’t start on time. When I walked into the AIIS office with Malabika, Sanjay and Subir. Subir said, “I thought you were supposed to come in August?” No apology, no nothing.