So, it’s day 2 of freedom. Mo more concrete floor, no more screaming and yelling, no more neglect and sexual assault.

This was my trip! Someone’s plan to take money from the program.

Malabika Brahma frequently said and told others ” It’s a robin hood thing, we take from the rich and give to the poor.” Had no idea she thought I was rich.   You could tell she really thought I had something. And was angry when…infact, I didn’t have any money. Like I had said before.

My face is numb and the entire right side of my body is numb. My feeling has been coming in and out through out the day. I have moments where I stare into the images in my mind. The manipulation, the lies. The treatment during my panic attack. She told me I had demons inside of me and they needed to be exorcised. She said there is a place in Kolkata where you go to for 10 days. You have no connection with the outside world and you eat when they tell you too etc. She said we can put you there for 10 days. Then see how you feel.

Of course I couldn’t respond. I was unaware of where I was. She told me I was bipolar because she had a friend who was. But I thought to myself, “If you have a friend who has this then why are you so surprised and treating me like a criminal?”  She screamed during the panic attack ” Get the fuck out I want to get this shit out of my brain.” I guess she must have been talking about her plan.  All during Durga Puja. I felt like I was in hell. In fact I was.

I went back to the videos I liked from their youtube page, and I realized every person in the shot was a person I eventually saw. on the trip who treated me very badly and was benefitting from the money. In Suri, I had no idea this was happening…until I arrived. The photos taken were at the end. Didn’t get a stall or anything to lay my jewelry out on. They just said somethings about my art while on stage at the end and that was it. I wasn’t even a part of the concert. No footage or pictures of me dancing.

Look at the captions. I was not featured. I was brought up at the end and given a piece of paper about my jewelry which had no place in their show, which they booked a long time ago. 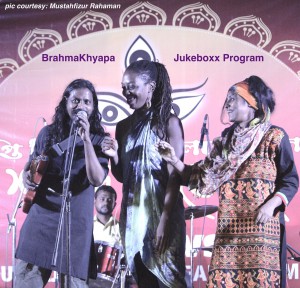 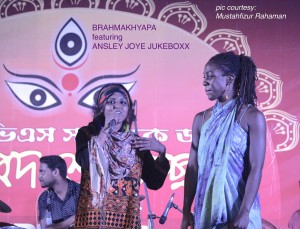 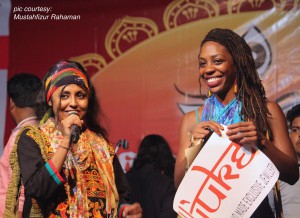 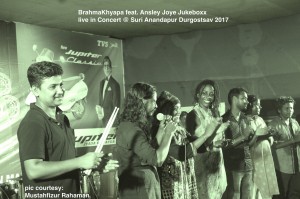 So we were in a very expensive hotel room before we went on and they bought 10 dishes while more than 20 people at a time sat on the bed and ate and smoked a chillum. I was kept in the room next door. They asked me if I wanted to stay the night or go back. I said go back. Had no idea how they were paying for all of this….But then of course they demanded money from me each and everytime. 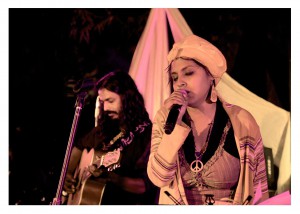 I still can’t feel my face as I think of this. I think my body is just so tried of manipulation in all forms that it is just reacting. Just reacting. Twitching from the screams and the heat. twitching from the inability to leave the house or to meet with other people. I was in a dungeon for a month. They had a room full of appliances they claimed did not work. But then would use them later in the day. Pathological lies from Malabika. She would lie about who cooked the food. Lie about people’s death and lie about people’s diseases. She said her friend is dying from cancer on the way to shantiniketan. She asked me to look up an extract that she said was unavailable in india and was seeing if I could get it.  She was crying and I felt I was supposed to do something. In fact she made me feel like I was letting her down by not reaching out to someone in the US that could do this illegal trade with her. She tried to make me feel like I was crazy…but, it didn’t work. I scratched and clawed my face while having the panic attack. and she stood their and watched. She watched me shake and cry with an emotionless face. She put Subir on the phone. She filmed and took pictures of me after they hadn’t fed me in 3 days DURING the panic attack.. This was after the ants were found in my food. This was the most horrific and evil experiences I have ever had…. I am still in shock. The way she blocked me on fb while in her house and began treating me badly. Refused to speak English so that I would feel more left out and constantly made sure I wasn’t in the same place for longer than 4 of the waking hours of the day. Over $3,000 US dollars stolen by Malabika Bhattacherjee (Brahma), Sanjay Bhattacherjee (Khyapa) of BrahmaKhyapa and Jungle Music School. A school that doesn’t exist. Two people told me….or tried to convince me. Mustafahfizur Rahaman and Her mother. They both told me “Malabika di is a great person.” If you have to tell me this, what does that say about her? At one point in the office while Subir was making copies, Malabika told me to prepare an invoiceshe needed, send it to her and Joy and they will send it to Subir. I was like wait…no I dont need to send anything to you!

I am going to meditate.